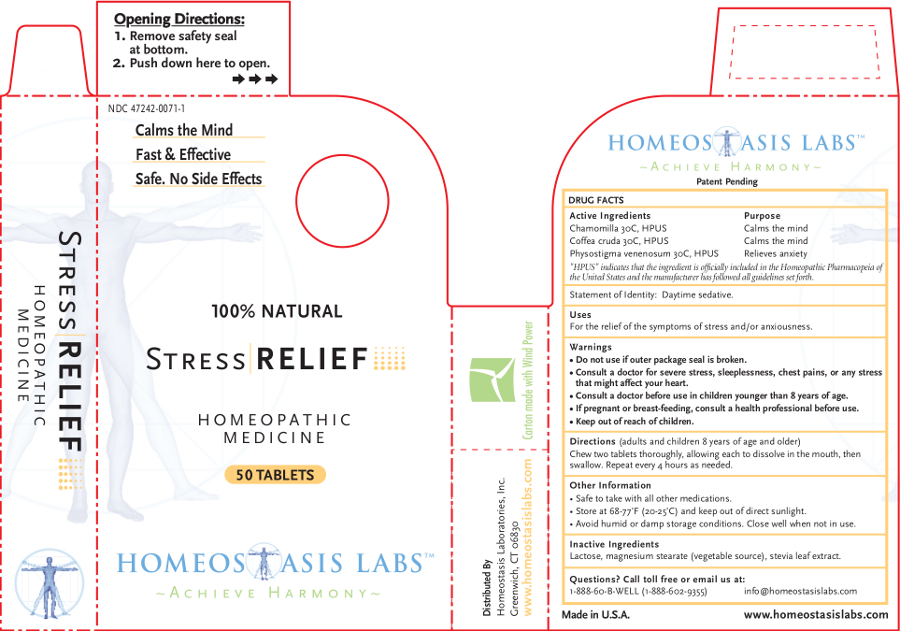 American Academy of Pediatrics and other medical experts exclusively recommend to breastfeed the baby for first 6 months. Once you introduce baby to other foods it is recommended to breastfeed for at least first year of babys life. Taking medication while breastfeeding could be tricky as most drugs pass in breast milk. In this article we will evaluate Stress Relief for its safety in breastfeeding.

What is Stress Relief used for?

For the relief of the symptoms of stress and/or anxiousness.

Is Stress Relief usage safe while breastfeeding? If a lactating mother is using it can there be any effect on growth or development of infant?

It is a widely used plant even in infants. Because of lack of toxicity, a moderate use is considered to be safe. If topically used, do not apply it on the nipple because risk of contact dermatitis has been reported. There are two different species with similar properties: 1) Common or Sweet Chamomile (Matricaria recutita or Chamomilla recutita). 2) Roman, English or Bitter Chamomile (Anthemis nobilis o Chamaemelum nobile). Inflorescence of the herb is used. Contains Essential Oil, Flavonoids, Lactones and Tannins. Unproven properties are: Anti-spasmodic. Digestive, Anti-inflammatory, Sedative.

Infant intake after usual daily consumption of the mother is lower than usual recommended dose for neonatal apnea treatment. Elimination-time period may last from few hours in adults, to 3-4 days in the newborn infant. At higher dose (more than 300 mg per day) caffeine may induce irritability, tremor and insomnia in the infant. However, some infants may develop irritability at a lower dose; in those cases the mother should decide appropriate coffee intake. Some studies have failed to show harmful effect among infants whose mothers were strong coffee consumers even during pregnancy. Daily intake as high as 1 liter or more has been associated to anemia and iron deficiency in mothers and breastfed infants. Also, has been related to the Raynaud's phenomenon in the nipple of nursing women. Mean Caffeine content: 1 coffee cup: 100 mg, 1 black tea cup: 80 mg, 1 green tea cup: 50 mg, 1 liter of cola & soda and energizers beverages 100 to 340 mg. See also Caffeine as medication. The American Academy of Pediatrics rates it compatible with breastfeeding.

Two different plant species with similar effects are known as chamomile: German chamomile (Matricaria recutita) and Roman chamomile (Chamaemelum nobile). Both contain similar ingredients, including sesquiterpenes (e.g., bisabolol, farnesene), sesquiterpenelactones (e.g., chamazulene, matricin), flavonoids (e.g., apigenin, luteolin), and volatile oils. Chamomile is used orally as a sedative and for gastrointestinal conditions; it is used topically for wound healing. Both herbal and homeopathic preparations have been used to treat mastitis and cracked, bleeding nipples.[1] Chamomile has been used as a galactogogue;[2][3] however, no scientifically valid clinical trials support this use. Galactogogues should never replace evaluation and counseling on modifiable factors that affect milk production.[4] Chamomile is "generally recognized as safe" (GRAS) for use in food by the U.S. Food and Drug Administration as a spice, seasoning, or flavoring agent. No data exist on the safety of chamomile in nursing mothers or infants, although rare sensitization may occur (see below).[5] It has been safely and effectively used alone and with other herbs in infants for the treatment of colic, diarrhea, and other conditions,[6][7][8][9] so the smaller amounts expected (but not demonstrated) in breastmilk are likely not to be harmful with usual maternal doses. Note Clostridium botulinum (botulism) spores have been found in some loose-leaf chamomile teas sold in health food stores. Topical chamomile is a known sensitizing agent, even with homeopathic products.[10] Two women developed contact dermatitis of the nipples and areolas after applying Kamillosan ointment for cracked nipples. The product was purchased in England and contained 10.5% Roman chamomile extracts and oil. Reactions were confirmed to be caused by Roman chamomile by patch testing in both women. Drinking chamomile tea can exacerbate topical skin rashes and has caused anaphylaxis in sensitized individuals.[11] Chamomile has possible cross-reactivity with other members of the aster family (e.g., echinacea, feverfew, and milk thistle).[5] Dietary supplements do not require extensive pre-marketing approval from the U.S. Food and Drug Administration. Manufacturers are responsible to ensure the safety, but do not need to the safety and effectiveness of dietary supplements before they are marketed. Dietary supplements may contain multiple ingredients, and differences are often found between labeled and actual ingredients or their amounts. A manufacturer may contract with an independent organization to verify the quality of a product or its ingredients, but that does certify the safety or effectiveness of a product. Because of the above issues, clinical testing results on one product may not be applicable to other products. More detailed information #about dietary supplements# is available elsewhere on the LactMed Web site.

I already used Stress Relief and meanwhile I breastfed my baby should I be concerned?

I am nursing mother and my doctor has suggested me to use Stress Relief, is it safe?

If I am using Stress Relief, will my baby need extra monitoring?

Who can I talk to if I have questions about usage of Stress Relief in breastfeeding?