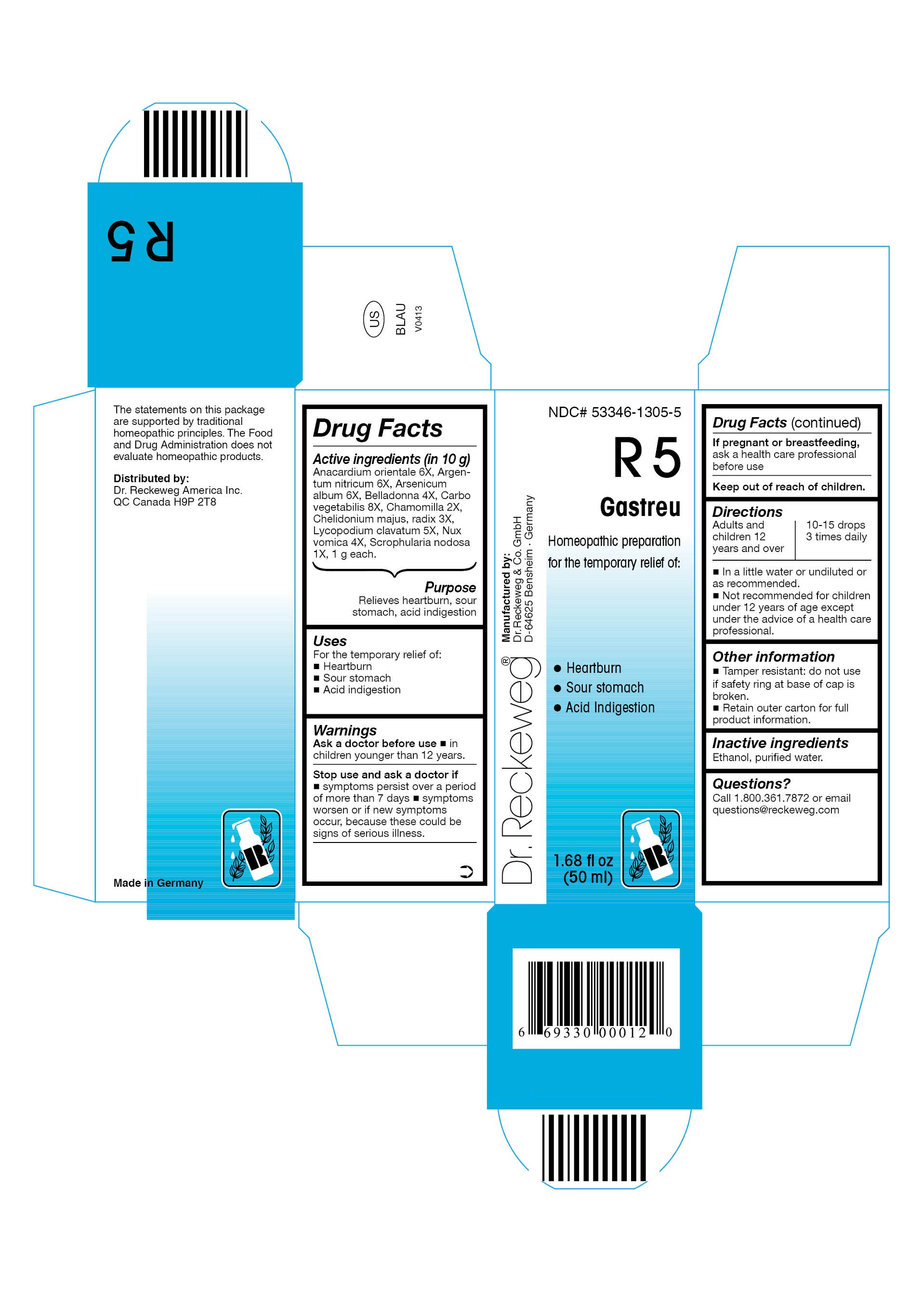 What is Dr. Reckeweg R5 Gastreu Combination Product used for?

For the temporary relief of: Heartburn Sour stomach Acid indigestion

I am currently breastfeeding and I want to know if using Dr. Reckeweg R5 Gastreu Combination Product is safe for my kid? Does it have any effect on milk production?

FDA does not regulate Dr. Reckeweg R5 Gastreu Combination Product. There is no credible study done on safety of Dr. Reckeweg R5 Gastreu Combination Product while breastfeeding, Same holds truth for almost all homeopathic medicines however homeopathic medicines go through a process called potentisation. In potentisation homeopathic preparation goes through repeated dilution and shaking. Homeopaths state that repeated dilution and shaking helps the body to heal naturally. Due to extreme dilution of active ingredients homeopathic medicines are mostly safe in breastfeeding, Hence we can consider Dr. Reckeweg R5 Gastreu Combination Product as safe to use while breastfeeding.. Below we have provided analysis of its active ingredients. Safety rating of ingredients holds truth for herbal product but may not apply for homeopathic diluted drugs.

Avoid using it on the breast or cleanse thoroughly before nursing.

Used in the treatment of promyelocitic leukemia in adults.

In herbal medicine the leaves of this plant that contains numerous alkaloids are used: l-hyoscyamine and atropine, scopolamine or hyoscine and, all of them potentially high toxic.Traditionally used with poor clinical evidence based on trials as anti-asthmatic, for common colds and intestinal spasms. At latest update no published data on excretion into breast milk were found. With anticholinergic and antimuscarinic properties that may reduce milk production: if necessary take as low dose as possible and avoid long-term treatment if decreasing milk production is observed.Serious side effects (tachycardia, thirst, fever, mydriasis, seizures, coma), especially in infants and newborns (Caksen 2003 Laffargue 2011, Glatstein 2014, Rodríguez-González 2014).There have been cases of gangrene when applied to the chest (Wani 2011). Belladonna may be included in association with other “over the counter" medications of doubtful effectiveness or safety. Overall drug associations are not recommended. Cautions when taking herbal teas:1. Make sure it is obtained from a reliable source: reportedly, poisonings have occurred due to confusion after using another plant with toxic effects (Hsu 1995), some others contain heavy metals that may cause poisoning and others may cause food poisoning due to contamination with bacteria or fungi.2. Do not take it excessively. "Natural" products are not always good in any amount: plants contain active substances from which are made many compounds of our traditional pharmacopoeia that can cause poisoning if consumed in exaggerated quantities or for long periods.

Powdered carbon with high adsorption levels.Administrated orally, it adsorbs drugs and toxins, avoiding their absorption from the gastrointestinal tract. It also has uses as an antidiarrheal and antiflatulent and for marking breast lesions in mammography. Since the last update we have not found published data about its excretion in breast milk. Its zero intestinal absorption (Torbet 2005, AEMPS 1998) prevents its passing into plasma and therefore into breast milk. It use is permitted in infants under one year old (Pediamecum 2015).

It is a widely used plant even in infants. Because of lack of toxicity, a moderate use is considered to be safe. If topically used, do not apply it on the nipple because risk of contact dermatitis has been reported. There are two different species with similar properties: 1) Common or Sweet Chamomile (Matricaria recutita or Chamomilla recutita). 2) Roman, English or Bitter Chamomile (Anthemis nobilis o Chamaemelum nobile). Inflorescence of the herb is used. Contains Essential Oil, Flavonoids, Lactones and Tannins. Unproven properties are: Anti-spasmodic. Digestive, Anti-inflammatory, Sedative.

Aerial summits and spores of this fern are used. Traditionally use as a diuretic and intestinal spasm relief drug. Also used for abrasions and skin irritation. It may be a cause of asthma and contact dermatitis.

Dried seed of this plant has been used. It contains brucine and strychnine. It is highly toxic and easily lethal.

Most sources consider breastfeeding to be contraindicated during maternal antineoplastic drug therapy. It might be possible to breastfeed safely during intermittent therapy with an appropriate period of breastfeeding abstinence; the manufacturer recommends an abstinence period of 1 week after the last dose. Chemotherapy may adversely affect the normal microbiome and chemical makeup of breastmilk.[1] Women who receive chemotherapy during pregnancy are more likely to have difficulty nursing their infant.[2]

Belladonna (Atropa belladonna) contains anticholinergic alkaloids such as atropine and scopolamine. Belladonna has been used in the past for headache, airway obstruction, and irritable bowel syndrome among others, but its use has been supplanted by more specific and less toxic compounds. Long-term use of belladonna might reduce milk production by reducing serum prolactin.[1] Application of belladonna paste to the nipple to reduce milk secretion during lactation is an extremely old use.[2] However, it is still used this way in rural India for treating breast abscesses and may have contributed to cases of breast gangrene.[3] Because of the narrow therapeutic index and variable potency of plant-based (i.e., nonstandardized) belladonna, it should be avoided orally and topically during lactation. Homeopathic products are not likely to interfere with breastfeeding or cause toxicity. Dietary supplements do not require extensive pre-marketing approval from the U.S. Food and Drug Administration. Manufacturers are responsible to ensure the safety, but do not need to the safety and effectiveness of dietary supplements before they are marketed. Dietary supplements may contain multiple ingredients, and differences are often found between labeled and actual ingredients or their amounts. A manufacturer may contract with an independent organization to verify the quality of a product or its ingredients, but that does certify the safety or effectiveness of a product. Because of the above issues, clinical testing results on one product may not be applicable to other products. More detailed information #about dietary supplements# is available elsewhere on the LactMed Web site.

Two different plant species with similar effects are known as chamomile: German chamomile (Matricaria recutita) and Roman chamomile (Chamaemelum nobile). Both contain similar ingredients, including sesquiterpenes (e.g., bisabolol, farnesene), sesquiterpenelactones (e.g., chamazulene, matricin), flavonoids (e.g., apigenin, luteolin), and volatile oils. Chamomile is used orally as a sedative and for gastrointestinal conditions; it is used topically for wound healing. Both herbal and homeopathic preparations have been used to treat mastitis and cracked, bleeding nipples.[1] Chamomile has been used as a galactogogue;[2][3] however, no scientifically valid clinical trials support this use. Galactogogues should never replace evaluation and counseling on modifiable factors that affect milk production.[4] Chamomile is "generally recognized as safe" (GRAS) for use in food by the U.S. Food and Drug Administration as a spice, seasoning, or flavoring agent. No data exist on the safety of chamomile in nursing mothers or infants, although rare sensitization may occur (see below).[5] It has been safely and effectively used alone and with other herbs in infants for the treatment of colic, diarrhea, and other conditions,[6][7][8][9] so the smaller amounts expected (but not demonstrated) in breastmilk are likely not to be harmful with usual maternal doses. Note Clostridium botulinum (botulism) spores have been found in some loose-leaf chamomile teas sold in health food stores. Topical chamomile is a known sensitizing agent, even with homeopathic products.[10] Two women developed contact dermatitis of the nipples and areolas after applying Kamillosan ointment for cracked nipples. The product was purchased in England and contained 10.5% Roman chamomile extracts and oil. Reactions were confirmed to be caused by Roman chamomile by patch testing in both women. Drinking chamomile tea can exacerbate topical skin rashes and has caused anaphylaxis in sensitized individuals.[11] Chamomile has possible cross-reactivity with other members of the aster family (e.g., echinacea, feverfew, and milk thistle).[5] Dietary supplements do not require extensive pre-marketing approval from the U.S. Food and Drug Administration. Manufacturers are responsible to ensure the safety, but do not need to the safety and effectiveness of dietary supplements before they are marketed. Dietary supplements may contain multiple ingredients, and differences are often found between labeled and actual ingredients or their amounts. A manufacturer may contract with an independent organization to verify the quality of a product or its ingredients, but that does certify the safety or effectiveness of a product. Because of the above issues, clinical testing results on one product may not be applicable to other products. More detailed information #about dietary supplements# is available elsewhere on the LactMed Web site.

What should I do if I am breastfeeding mother and I am already exposed to Dr. Reckeweg R5 Gastreu Combination Product?

My health care provider has asked me to use Dr. Reckeweg R5 Gastreu Combination Product, what to do?

Homeopathic medicines are usually safe in breastfeeding and if Dr. Reckeweg R5 Gastreu Combination Product has been recommended by doctor then there should be no concern about its usage in breastfeeding.

If I am using Dr. Reckeweg R5 Gastreu Combination Product, will my baby need extra monitoring?

Who can I talk to if I have questions about usage of Dr. Reckeweg R5 Gastreu Combination Product in breastfeeding?